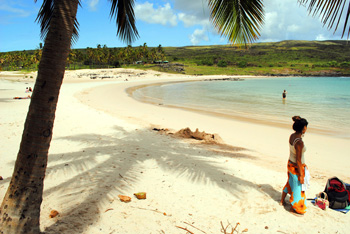 Anakena is the biggest sand beach of Rapa Nui.

The great Ahu Nau-Nau of Anakena in morning light.

Anakena is the only big tropical sand beach of Rapa Nui. Decorated with palm trees it's a great place to spend a free day. A few small kitchens are on the beach serving BBQ, empanadas, natural fruit juices and alcoholic drinks.

Anakena is also known as Haŋa rau o te 'ariki - The bay of the king, named after how the first Rapa Nui king Hotu Matu'a disembarked here a thousand years ago when the island was first populated. This was where king Hotu Matu'a built his first house, and forevermore Anakena remained the sacred land of the royal family.

Anakena has two ahu. One of them is Ahu Nau-Nau which has seven moai statues, two of which are broken. The other one is called Ahu Ature Huke and has only 1 moai statue. The moai of Ahu Ature Huke is the first moai statue ever to be restored and raised. This was done by Norwegian explorer Thor Heyerdahl in 1956. The moai was raised by using only rocks, logs and rope. The logs were used as levers to lift the statue and rocks were put underneath, raising the statue little by little.

Norwegian adventurer Thor Heyerdahl and his archaeological expedition team had their camp here in 1955-1956 and in 1986.

Light only falls on the faces of the moai of Ahu Nau-Nau during a short while in the early morning, just after sunrise. To not miss this window you may bring a tent to sleep in the small forest up the hill just beside the beach at the east side.

The ahu wall gets illuminated in the afternoon.

Visit Anakena by booking one of our travel packages with private tours included.