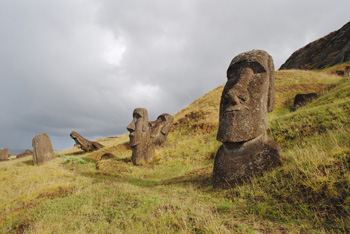 Moai statues are massive megaliths at Easter Island, and these are what this island is famous for. The moais were built in approximately 1400 - 1650 A.D. by the natives of this island also known as Rapa Nui.

Many know them as the Easter Island heads. This is a misconception from having seen photos of statues in the volcano Rano Raraku partitially covered up with soil. Truth is that all of these "heads" have full bodies.

There are around 1000 statues, up to 86 tons tons in weight and 10 m in height, though average is around half of that. 95% of the moais were carved from the volcano Rano Raraku. This location was chosen since it consists to a great extent of tuff, which is what the moais from this volcano consist of. Tuff is compressed volcanic ash and is easy to carve, which was necessary since the natives had no metal to carve with, but used only stone tools; the so called toki.

What do moais represent? 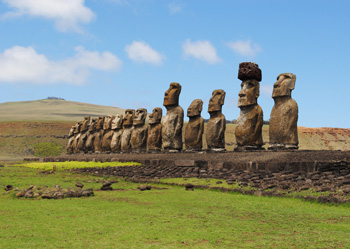 Moai statues were built to honor chieftain or other important people who had passed away. They were placed on rectangular stone platforms called ahu, which are tombs for the people that the statues represented. The moais were intentionally made with different characteristics since they were intended to keep the appearence of the person it represented.

There was one group of carvers from which the statues were bought. The buying tribe would pay with whatever they had large quantities of. Examples of trade items would be sweet potatoes, chickens, bananas, mats and obsidian tools. Since a larger statue would mean a higher cost, bigger statues would also mean more greatness for the tribe, since it would be a proof of that the tribesmen are clever and hard-working enough to pay.

Eyeholes would not be carved until the statue reached its destination. A pukao of red scoria stone from the quarry Puna Pau would in later years sometimes be placed on the head of the statue to represent the long hair the desceased had, which was a sign of mana; a kind of mental power. Eyes of coral would mark the final touch, and the moai would be an 'ariŋa ora or living face. The spirit of he or she who had passed away would forever watch over the tribe and bring fortune in life. This is why the statues are called mōai - so that he can exist

When the first European ship arrived to Easter Island in 1722, all statues that were reported on were still standing. Later visitors report on more statues that have fallen as the years pass, and in the end of the 19th century, not a single statue is standing. The most common theory to this is that the statues were overthrown in tribal warfare to humiliate the enemy. An argument for this is the fact that most statues have fallen forward with the face into the earth.

There is also a legend about a woman called Nuahine Pīkea 'Uri who possessed strong mana powers and made the statues fall in anger when her four children at one occasion had left her nothing to eat. Some Easter Island elders still believe this to be the true story.

The tools used for carving the moai statues are called toki, and are simple handheld chisels. They have been found in countless numbers in all excavations at Rano Raraku - particularly around the statues. The highest quality toki are made of hawaiite, which is the hardest kind of rock found at Easter Island. There is only one place where this can be found - in a toki quarry called Rua Toki-Toki just south of Ovahe at the north side of Rapa Nui. Its scarcity, while still being used for something as central and important as carving moais, made it highly valuable in ancient times.

As the first European visitor to the island in 1722, Jacob Roggeveen reported in his ship log of people praying to the statues:

The people had, to judge by appearances, no weapons; although, as I remarked, they relied in case of need on their gods or idols which stand erected all along the sea shore in great numbers, before which they fall down and invoke them. These idols were all hewn out of stone, and in the form of a man, with long ears, adorned on the head with a crown, yet all made with skill: whereat we wondered not a little. A clear space was reserved round these objects of worship by laying stones to a distance of twenty or thirty paces. I took some of the people to be priests, because they paid more reverence to the gods than did the rest; and showed themselves much more devout in their ministrations. One could also distinguish these from the other people quite well, not only by their wearing great white plugs in their ear lobes, but in having the head wholly shaven and hairless.

Only Jacob Roggeveen in 1722 has ever reported on someone praying to the statues, which would suggest that the statues were revered until Europeans came. Though, it was common all over the island to recycle pieces of old statues when building new ahu platforms. This seemingly means that the moais were not seen as holy anymore when the person it represented had been forgotten. 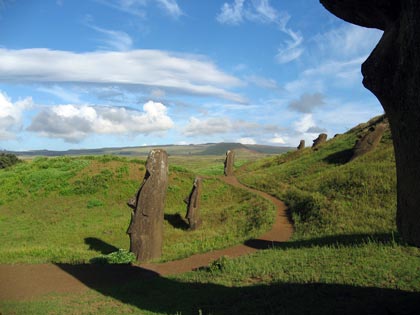 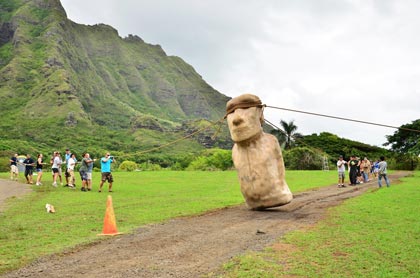 5 ton moai statue replica is made to walk by rocking it during 2012 July experiment at Hawai'i by Terry Hunt and Carl Lipo.

One of the biggest Easter Island mysteries is how stone age tribes could succeed in transporting 50+ ton moai statues kilometers across hilly terrain. There are several transportation theories, some of which are more generally accepted than others.

There are many moai statues that fell during transportation to their ahu. Some of these are on their stomach and some on their back. This tells us that the moais were transported upright. Since the moais are standing in the quarry Rano Raraku, and they are standing when having reached their ahu, upright transportation saved the Rapa Nui people the huge amount of labor of lowering and raising the statues.

The most widely accepted theory is that the statues were standing on some kind of construction that would keep the statue standing, which would roll on logs. With this technique, brute force could be applied and rapid, safe moai statue transportation would be possible. As statues got bigger, huge amounts of lumber would be needed. This would eventually cause deforestation of all thick and straight trees, which then made transportation impossible.

American archaeologist Charles Love experimented with the technique of transporting a statue on rollers. He moved a 9 ton moai replica 40 meters in only 2 minutes, using not more than 25 people. No other moai transportation experiment has been able to match this one in speed.

According to oral tradition, the moai statues walked to their destination. A literal interpretation of this legend would be that the statues were rocked from side to side, just like you would a refridgerator, to actually make them walk. For this, no wood would be required - only ropes.

There are three main weaknesses with this theory:

Norwegian explorer Thor Heyerdahl together with Pavel Pavel were the first ones to experiment with this transportation theory and did so with a 9 ton ancient statue in 1986. First they only dragged a statue on the ground, one side at a time. This took lots of time and energy without much result. Later they attached ropes also to the head to be able to make it tilt while turning, and the statue moved with much greater ease.

The second experiment of this theory was performed in July 2012 at Hawai'i by American archaeologists Terry Hunt and Carl Lipo. A 5 ton replica was moved by a group of 30 people. This experiment received great attention world-wide through a National Geographic report.

That aliens made the moai statues is a quite common belief. Though, according to oral legends the Rapa Nui people made the statues. Also, the further away statues are from the statue quarry Rano Raraku and the higher the elevation of their final destination, the smaller the statues are, because people had to drag them there. 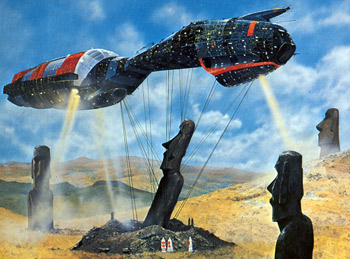 The moai hats actually represent topknots - hair, tied up like a ball on top of the head, called pukao in Rapa Nui. The mana (supernatural powers) was according to ancient beliefs preserved in the hair, which is why chieftains never cut their hair.

How moai statue hats pukao were put in place

Below are three different accounts that tell how the moai hats were put in place on top of the statues.

This is what my grandfather Tori 'a Papaveri said to me:
Pē nei i kī mai ai tō'oku tupuna ko Tori 'a Papaveri:
To make the moai hat reach its place, a pile of rocks was built. The hat was pushed and pushed upwards to the head of the moai.
Mo haka tu'u o te ha'u o te mōai, e titi hai pipihoreko; 'ai ka huri te ha'u ka iri ki ruŋa ki te pū'oko o te mōai.
It was made to enter using a xxxxxxxxxxxxxxxxxxxxx.
He haka uru hai raŋo; he aŋa i te raŋo hai akauve.
When done, the rock pile was dismantled and the rocks were used for the ahu.
Ki oti te mou-mou te pipihoreko, he to'o i te mā'ea, he haka rere mo te ahu.

The three people who originally told these stories (Tori, Huhu Kahu and Veriamo) were all born before 1850, before the ancient Rapa Nui culture reached its end, which makes these accounts a valuable and reliable resource.

Matā, or obsidian (volcanic glass) tools, is by far the most common archaeological trace of the Rapa Nui culture. Most elders have a collection of these in their homes and big quantities are scattered at museums all over the world. The matā exist in several types and sizes.

The usage of these stones would be anything that would require a sharp edge, such as cutting fibers (for clothing, house building, mats, ropes etc), carving wooden sculptures or rongo-rongo, as well as for spear points.

It's a common misunderstanding that all of these stones were used for warfare. More often than not, the word matā is actually mistakingly translated into English as obsidian spear point. If this translation was to be true, it would mean that basically every archaeological find at Rapa Nui would be a weapon, which obviously isn't realistic. Even a dedicated matato'a, war chief, would surely during his life span use a greater quantity of fiber cutting tools for daily life than weapons.