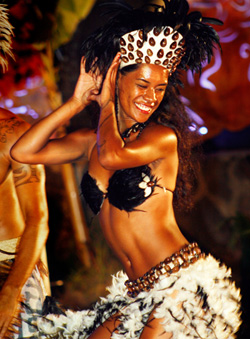 Girl dancing at the evening scene of the Tapati Rapa Nui festival.

The Tapati Rapa Nui is an annual, two week long festival held in the beginning of February, in which two families compete in cultural competitions all over the island, such as music, sculpture, sports, body painting, fishing and much more. Each of the two families have a representative - a queen canditate. The candidates have to partake in most of the competitions, which can sometimes be several on the same day. The candidates and their fellow family representatives gain points for winning competitions, and the family that at the end of the festival has had most points will have its cadidate crowned queen.

It started out as a small local event in the year of 1975, by and for the people. The island didn't have much tourism to speak of, so the annual tradition that started to grow in popularity among the local people, remained unknown to the outside world. In 2000 and later, tourism exploded and continued to grow until present day, which has given the Tapati festival an opportunity to grow enormusly.

Tourists are allowed to participate in two competitions:

A month of practice is required, which means you will have to be present in the beginning of January. Costumes will be made and given to you by the family that you choose to support. Dances are performed on two occasions and usually 150-200 people are participating.

At the end of the festival. Families gain points for the quantity of participators, as well as for the artistic creations they present. Body paint and costumes will be offered to you by the family that you choose to support at the common place of gathering and preparation of that family.

Tourists participating in the parade